Short description of this page. Mini-PC for office and home office with dual monitors at about the same price as a laptop alone and about 45% less CO2. Durable due to easy replacement of monitor, hard drive, motherboard, CPU, fan.

This miniPC with dual monitors and a matching bracket looks tidy and is about the same cost as one 14"/15" Laptop alone, with the same performance. There are other advantages:


In terms of portability, laptops and tablets are of course irreplaceable. Our product is intended to provide an ergonomic working environment. It can often be observed that a laptop (closed) is connected to 2 larger monitors via docking station, but there is hardly any free space on an actually large table because of the many cables and devices on it.

The measurements show that MiniPCs with an external power supply, do not consume more power for the same performance, and there is no power loss due to battery charging. In terms of carbon footprint, notebooks use around 45% more CO2 than mini-PCs, according to the German Federal Environment study.

The flexible bracket enables easy assembly for 2 monitors 22" - 27" and 1x MiniPC. We have thought of a tidy cable run and fastening. Existing monitor holder can hold 2 monitors 24" in a stable manner, without screwing. 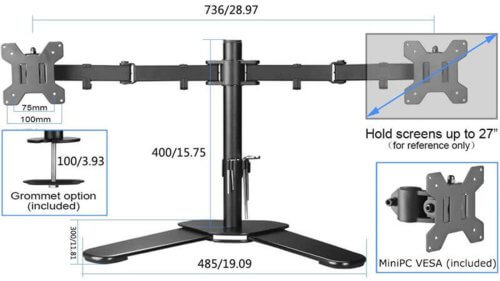 When MiniPC is purchased with Windows 10 it will be delivered pre-installed, as usually the case with OEM manufacturers (such as HP, Lenovo, Dell ...). If you buy without a licence, then you have to install an operating system. For larger quantities, PXE boot server is a good method for automatic installation.

PXE (Preboot Execution Environment) makes it possible to boot client computers via a PXE server. Almost all computers, such as laptop, thin client, workstation, server with integrated network adapter, can boot via the network. A computer must be set in the UEFI BIOS (usually with the DEL or F2 key) to boot via network.

An even better and modern way is to use an MDM SaaS service such as Microsoft Intune or Endpoint Manager. With Endpoint Manager, you can automatically install and update your business apps, as well as perform Windows update, deliver firewall and virus protection settings, and much more.

The product described below with a small housing from Inter-Tech and ASRock Mini-ITX mainboard is an example. Other barebones are conceivable such as Intel NUC, Zotac Zbox ..
In any case, you can configure this MiniPC with more memory, hard disk or more CPU performance before delivery.

The proposed processor I3-10100T is comparable to the laptop CPU i5-10210U, according to UserBenchmark a little better.

For your questions or for an individual PDF offer write us.

Looking for more productivity and independence from classic LAN networks ?

From 6.09 EUR / mth.   Office 365 E1 includes Microsoft 365 Business Basic and is for more than 300 users, more functionality in Microsoft Stream and video recording

From 0 EUR / h   Free consulting on the topics: Microsoft licenses and cost savings, modern and flexible workplaces, specifics of the customer network, recommendations for possible migration

?  I do not know which plan is the best for my company's business, I also find the terminology complicated. If you also feel the same as many others, then write us or see:
Microsoft 365 plans comparisonMicrosoft Office 365 buy, costMicrosoft 365 Support (FAQ)