Almost all computers, such as laptop, thin client, workstation, server with an integrated network adapter, can boot over the network.
Author: bha created on 2019-02-16

Through PXE (Preboot Execution Environment) it is possible to boot client computers via network server. Almost all computers, such as laptop, thin client, workstation, server with an integrated network adapter, can boot over the network. A computer must be set in the UEFI-BIOS (usually with DEL key) to boot over network.

Servers provide some services such as: DHCP, HTTP, TFTP with bootfiles. DHCP service can also be provided as usual by a router. For some years, computers have been supplied with UEFI (instead of BIOS). UEFI currently has higher requirements for PXE server software.
For example, Windows Server 2012 R2 and later is required to install UEFI Client Computer via Windows Deployment Services (WDS).

To install, backup, and restore ThinClient computers like Intel NUC-Mini-PCs and others Mini-PCs we offer server solutions based on Linux RouterOS incl. lifetime license.

Adapted to our Mini-PCs / ThinClients which we offer with either Ubuntu 18.04 Desktop or Windows 10 Pro, PXE boot server is delivered with the following boot menu functions, see pictures below. 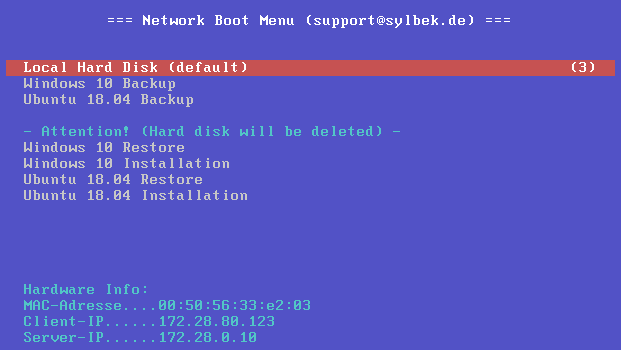 Web-based configuration of users and shares As operating system for PXE boot server Linux RouterOS is used. You can configure the software via WEB or Winbox for Windows.

We use Linux RouterOS since 2006 to realize products such as VPN, hotspot and bandwidth management solutions. Below is the setting in the SMB section for how easily you can configure shares and users.

PXE Server, optional featuresThere are other features available to automate your client installation as:

PXE Server, a tool for your client administration

Our experience of developing 'finished' products that contain only essential functions could be useful to you.
For example, anyone can create a hard disk backup, simply by menu selection, without further decision. The backup includes MAC-Address in the name, so it can be assigned.
The same when restoring the last backup, only the data deletion notice requires confirmation. In both cases, the computer is ready for use in the usual desktop environment after about 5 minutes (usually 8GB for Windows 10).

An IT administrator/technician can change and expand the boot menu. We can assist you by phone or by remote maintenance. Even complicated tasks can be done so, you only pay for the effective use and only when needed.

For the above-mentioned options or other product adjustments to your individual company needs, we offer you, depending on the size of the network, for an hourly rate of 80-100 EUR. If we agree on a number of hours of approx. 10h/week for a period of approx. 6 months, the hourly rate can be halved.

Our PXE boot server is designed more for permanent installations and operating system backup and recovery.
Of course, it is also a suitable solution for rollout installations for network sizes with about 100 computers

If you rather prefer Windows Server Deployment Service (WDS) or Symantec Ghost Solution Suite we can assist you from the technical side as well.
In the area of rollout technical planning, we can prove references for large networks with several thousands of computers.

Especially when it comes to new devices, we can support you in the technical planning, participate or take over this project completely, even if you purchase the devices yourself.
Through our remote support and remote maintenance together with your technician, client support costs can be reduced to a minimum, simply through the use of modern technologies.

Write to us,
you can expect an answer on the same or next working day.

Customer consulting
To find out which licence is best for your company and fits your budget, arrange an online meeting with us via Microsoft Teams.
The specifics of your existing network will be discussed and taken into account for a possible migration of users and data.

Customer support
For your Office 365 or Microsoft 365 tenant (new or existing), you can count on our support at fair prices. We can use your ticket system or our support Jira ServiceDesk, see Exemplar ticket.

Microsoft competencies
You will be supported by security experts, for which knowledge is constantly gained and proven by manufacturer certificates. This is a MUST for us to keep out customer support at the highest level and up to date.